In the fluffy noir world of Torsobear, not all toys play nice! 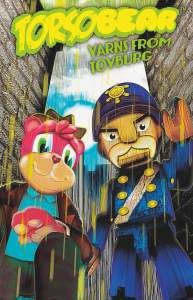 Welcome to the city of Toyburg, where the sweet streets are teeming with crime, passion, and murders most foul. They are walked (for the most part) by grim detectives, burned-out has-beens, femme fatales and tragic heroes.

The dismembered bodies of teddy bears are being found in back alleys of Mindy Mile district, and it’s up to our hero, rookie detective Ruxby Bear and his partner officer Hazbrow to solve this string of murders, no matter how high and far the clues take them.

Between cases, we take a look into the lives of Toyburg’s citizens, police and criminals. No matter where you turn, this city has something sinister hidden just behind the storybook surface.

Remember, it’s always fun until someone gets hurt…

The past isn’t like it used to be. In the early days of Toyburg the men were wood and tin, and the women were porcelain. Who cares if a few immigrant teddies get torn apart in the dark of the night. Enter young officer Hazbrow, fresh out of the block and sap behind his ears, who is going to learn a valuable life lesson about caring.

Torsobear Volume 2: All Stitched Up

RUXBY THE BEAR DETECTIVE HAS BEEN SENT TO THE CORNER, TO THINK ABOUT WHAT HE DID. 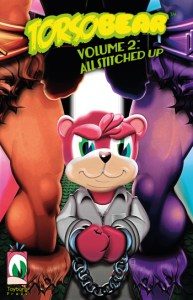 With its greatest cop boxed up in toy prison, the sweet city of Toyburg is overrun with playthings on the edge of madness – driven by a mysterious force, obsessed with the crimes of others.

Looking back on recent villainy, can Ruxby survive long enough in jail to figure out who framed him? Can Hazbrow hold Toyburg Police together long enough to turn the tide?

Return to Fluffy Noir in this Step Beyond Imagination.

Torsobear Volume 3: Back on the Blocks

‘The toys want to tear it down, one bear fights to defend it, and for one cat playtime in the city is over. 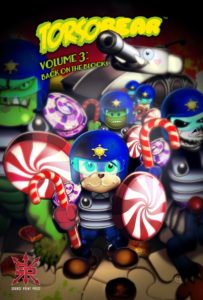 Return to sweet Toyburg one more time, where the puzzle-piece streets thunder with voices raised against Mayor Huggington. In a police force of hired ex-villains, Ruxby Bear is one of the few real cops who pledge to protect and serve all toys.

Along with his old wooden friend Hazbrow, and wife Mytell, they must stand strong against the tyranny of powerful toys. Can they stop their fellow citizens from wrecking the districts, and the evil Copycat in his quest for chaos?

Fuzzy families, police and criminals all have their perspective on the rising chaos gripping Toyworld, and how they face the dangers will define them.

Ruxby gets real, because it’s time to clean up those blocks.’